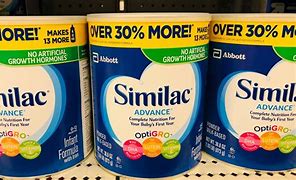 A large recall by Abbott Nutrition in Sturgis, Michigan, the maker of some of the name-brand baby formulas, such as Similac, had a shutdown after babies who drank the formula contracted a rare bacterial infection, which then led to a recall as well.

U.S. Department of Agriculture Secretary, Tom Vilsack says that they are” acutely aware that the ongoing recall has left many parents and caregivers concerned about access to formula and how they will feed their babies,” said Agriculture Secretary Tom Vilsack. “Our team is committed to the health and safety of all Americans and is calling on states to act immediately to offer maximum flexibility, information, and support to WIC participants. Meanwhile, USDA will continue the work we started in Feb., working not only within our department but across the federal government, suppliers, and partners to end this infant formula crisis as quickly as possible.”

USDA is offering states more flexibility in their Supplementation Nutrition Program for Women, Infants, and Children, known as WIC. Typically, WIC has certain purchasing restrictions. USDA is pushing states to consider relaxing WIC rules with things such as allowing alternative sizes, forms, and brands of formula that people can purchase under the WIC program.

In addition, the USDA is working with Abbott to assist them in redoubling efforts to manufacture formulas. With Food and Drug Administration Approval, Abbott should be open again in the next few weeks. However, it will take six to eight weeks to replenish products at the grocery store. Lawmakers have been working with other formula manufacturing companies to ramp up formula manufacturing. According to a USDA news release, over the last several months, the federal government has worked round the clock to address the production shortfall brought about by the recall. Because of ongoing work, more infant formula has been produced in the last four weeks than in the four weeks that preceded the recall, despite one of the largest infant formula production facilities in the country being offline during that time.