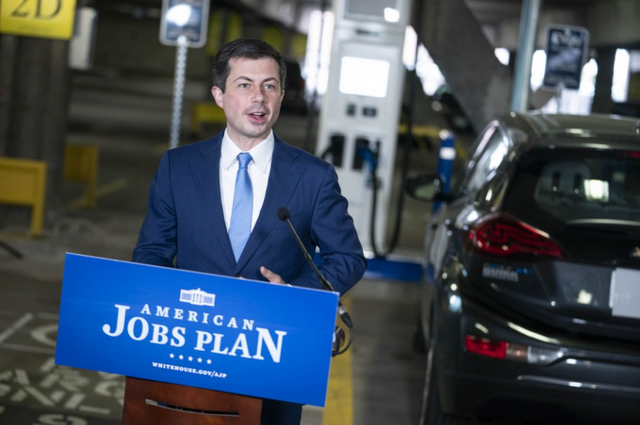 United States Department of Transportation Secretary Pete Buttigieg discussed the toolkit they provided for planning and funding electric mobility infrastructure and the importance of the National Roadway Safety Strategy for rural America.

Full transcription of the interview below:

Buttigieg: Thank you, I appreciate you having me on

Brent: Well Secretary, the Biden-Harris administration has been aggressive in its efforts to accelerate the production and usage of electric vehicles in the United States and in December the President said he’d like to see electric vehicles account for 50% of all vehicles sold by 2030. It seems unlikely that aggressive targets are going to be hit without participation from rural America. So your agency is taking steps to work with rural communities across the country to provide resources to help build out that infrastructure and one of the things that you’ve done here is put together a toolkit for planning and funding rural electric mobility infrastructure.

Question 1: What can you tell us about it?

Answer: That’s right. We put out this toolkit for electric vehicles in rural America because we think rural America stands to gain a great deal from adopting these electric cars, pickups, and other vehicles. Look, the reason we need to move toward EV’s it’s a chance to create good American jobs and of course it means cleaner air and helps us with climate change issues too. Now a lot of people think of these electric vehicles as a luxury item and something you see mostly in cities and that is how it started out. But now as you see more and more of these cars and pickups coming into the market. I actually think that some of the biggest opportunities are in rural America. If you just think about it for a second. You know rural Americans are more likely to drive longer distances. Spend more money on gas and that means they’re going to save more money because filling up on electric is cheaper than filling up on gas. You added that the fact that a lot of rural Americans live in single-family homes compared in our bigger cities which means you’re more likely to have a garage or a carport that’s going to have a place to plug in overnight which is a big issue in terms of being able to charge these things but we’ve also gotta make sure that there aren’t just chargers you know, the ability to plug in at home just into a regular wall socket but do we have fast chargers all around the country and that’s what we’re working on with this toolkit. We’ve got a lot of funding thanks to the President’s new law to help communities including rural communities put up these electric charging stations that people are going to want to count on just as you count on being able to fill up whenever you need to go.

Brent: Well the funding comes from the President’s bipartisan infrastructure law which includes 7 and a half 1 billion dollars to develop a nationwide network of a half of a million electric vehicle chargers as rural communities start thinking about implementing an electric vehicle charging strategy. I know one thing, many people wonder.

Question 2:  A. Is there enough grid capacity to handle an increase in electric vehicle charging in rural areas and B. What is being done to make sure that the grid is reliable and secure?

Answer: That’s right. Very important to make sure we build up our electric grid for many reasons, really. It needs to be strengthened but this is one of them. That’s going to be more demand on the grid from things like electric vehicles and we gotta prepare for that. So another part of the President’s infrastructure bill is funding for enhancements to our grid and these are some of the issues that we speak to in this toolkit as well. Going to take a lot of partnership. You know, you’re going to need local communities to partner with their REMC or local utility. Whether its municipal co-op or a company in order to make sure that they’re ready and we can help, I think we have created a head start on making that a little easier to do. That’s why I’ve been teaming up with the Department of Energy Secretary of Granholm. We’ve set up a joint office to help issue good guidance and make it as straightforward as we can to help these communities move into this very important technology the drivers and passengers are going to count on.

Brent: Well, as you loaded earlier, many folks in rural America have to drive a good distance to larger communities to be able to workshop and eat and their concerns about the range these vehicles have and just the logistics of charging between trips.

Question 3: Are those concerns warranted or is this part of the whole initiative of education about the benefits and capabilities of these vehicles?

Answer: Well, I will say you know, these vehicles that you’re seeing now come on the market. They have some pretty good range, 2/3/400 miles but still, if you’re driving long distances everyday, you’re going to want to know that you have some options to charge when you need to charge. That’s exactly why we gotta make sure we have a strong charging network. We’re going to build a lot of it around the interstate highway system. That’s where some of the first ones I think are going to go but we also gotta go from the bottom up. We gotta go from smaller communities out even while we’re working our way out from the interstate highways system itself and that means having lots of good options. A lot of them, I think you’re going to see, as we’re already beginning to see, you know, question around retail locations where you can charge, go in do a little shopping, come back out, and you’re all charged up but these are exactly the kind of things we want more information out there in which is what this toolkit’s all about. We want to help local decision makers whether it’s counties, mayors, or even companies, you know shop owners or downtown planners on America’s rural main streets figuring out how to help their communities go electric. The sooner we can do this, the more Americans in rural areas can take advantage of those real dollars and cents savings that come from owning an electric vehicle.

Brent: Well, one of the ways the Department of Transportation is working to educate communities on the behalf of electric vehicles and charging stations is through a free webinar during which you’re going to unpack the toolkit that’s going to help, Wednesday, February 9th at 1:30pm Eastern.

Question 4: What can you tell us about the event?

Answer: That’s right. It’s a chance to get a little more information out there and if you don’t happen to be free at that time, we got a whole website about this. I think it’s transportation/rural/ev or you can just look up on a search engine. Look up rural EV toolkit and again the idea is that you know these electric vehicles, these cars and pickups for us to meet our goals as a country. We got to get to where these vehicles are available to everybody. That they’re not just a luxury item. They’re not just in big cities but that every American can get a hold of these, can use them. We’re working to make them more affordable as well and I’ll tell you when you'[re in one of these cars, you’re in one of these pickups you’re not going to want to go back. It’s really impressive in terms of performance as well as what it means in terms of the benefits of cleaner air and again saving all that gas money.

Brent: Well, registration is required for the webinar. We’ll share a link in the news section at ruralstrongmedia.com and on our socials. This is just one of the many workshops of the Department of Transportation is going to hold with rural communities and stakeholders to gather feedback on the toolkit and provide information to help get rural communities up to speed. Understand this summer, there’s going to be an updated toolkit to include some feedback from those workshops and some expanded information about new programs and also offer some information on topics such as transit and school bus electrification. So, this is an ever developing topic and you’re doing your best to keep everyone plugged in, pun intended.

Buttigieg: Well said, yeah, you know, we’re right now we’re talking about cars and pickups but there’s a lot that’s going to happen in terms of school buses which is so important for kid’s health as well. You know the air is cleaner around these buses. Save the school’s district’s money in terms of the charge up and it will be really interesting to see things develop on the heavy equipment side and that’s something else we’re excited to stay in touch with the leaders in rural America about so look for more information from our department look for more news over the months ahead as we start really moving these dollars and look for a difference in the community near you.

Brent: Well before we let you go, I’d be remiss if we didn’t briefly touch on last week’s announcement about your National Roadway Safety Strategy. We saw that in 2020 despite more people staying at home and off the roads traffic deaths increased to nearly 39, 000 across the country which is the highest number in 13 years and what we know from the data is the folks in rural America seem to be among the groups disproportionately affected.

Question 5: How do we go about keeping our rural roadways and the citizens who travel on them safe?

Answer: Well, this is something that has to change. There are far far too many Americans we can all think of somebody we know and care about who lose their lives in crashes on our roadways and it doesn’t have to be that way. You know, there are a lot of places around the country, a lot of places around the world that have made it to where they’ll go off in a year or more with zero roadway fatalities. We gotta have that happen more and more often until we get there here in the United States. Rural Americans are especially likely unfortunately to experience injury crashes or fatal crashes. There are things we can do about that. Making sure we design our roads better, making sure that we have safer cars, making sure that we have safer driving going on. A lot of steps need to happen all at once and we’re ready to put some funding behind that. If a community wants to create a safer place across the street if there’s a way that a highway can be redesigned in order to have fewer crashes. We’re going to support that with real dollars and cents out of the President’s bipartisan infrastructure law and by putting that money to good work, we’re going to save lives. Well, Secretary, we want to thank you so much for taking the time to join us here today and invite you to come back to provide us with the status update on the electric vehicle toolkit or any other Department of Transportation initiatives that will have an impact on rural America.

Buttigieg: Well thanks. I’d look forward to that and appreciate you having me on today.