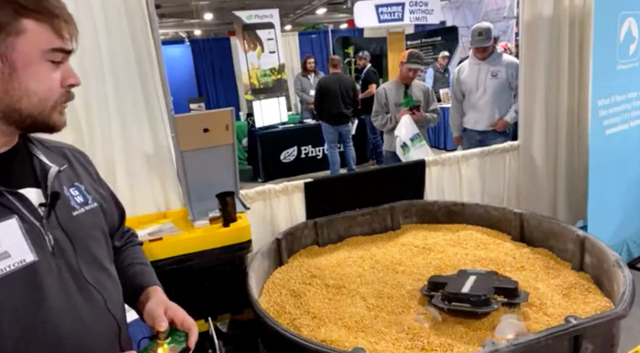 The award was announced during the closing general session of the 103rd American Farm Bureau Federation Convention in Atlanta.

Grain Weevil has developed a remote-controlled robot that can clean grain bins. It is capable of doing anything a farmer can do in a grain bin. The unit was designed to keep farmers safe, improve workflow efficiency and preserve grain quality.

The Grain Weevil robot was designed by Ben Johnson a recent electrical engineering graduate from the University of Nebraska Omaha. His father, Chad Johnson, serves as the company’s CEO.

See our interview with Grain Weevil from the Nebraska Ag Expo

Another Nebraska company, Birds Eye Robotics, was chosen as runner-up. The company, led by inventor Scott Niewohner, has developed a robot that assists with the daily operation of poultry barns.

Launched in 2015, the challenge was the first national business competition of its kind focused exclusively on rural entrepreneurs who are addressing traditional challenges farmers face on their operation, such as access to labor, optimizing yield and reducing operating costs, as well as other challenges in rural America.

Ten finalists were selected and the winner and runner-up were chosen after a live pitch competition at the conference. A total of $165,000 in funding was awarded to the competitors.More about Grain Weevil can be found at https://www.grainweevil.com/. Learn more about Birds Eye Robotics here: https://www.birdseyerobotics.com/.

We will have a complete interview with Chad Johnson and Ben Johnson on Episode 10 of the Tractors and Troubadours podcast.