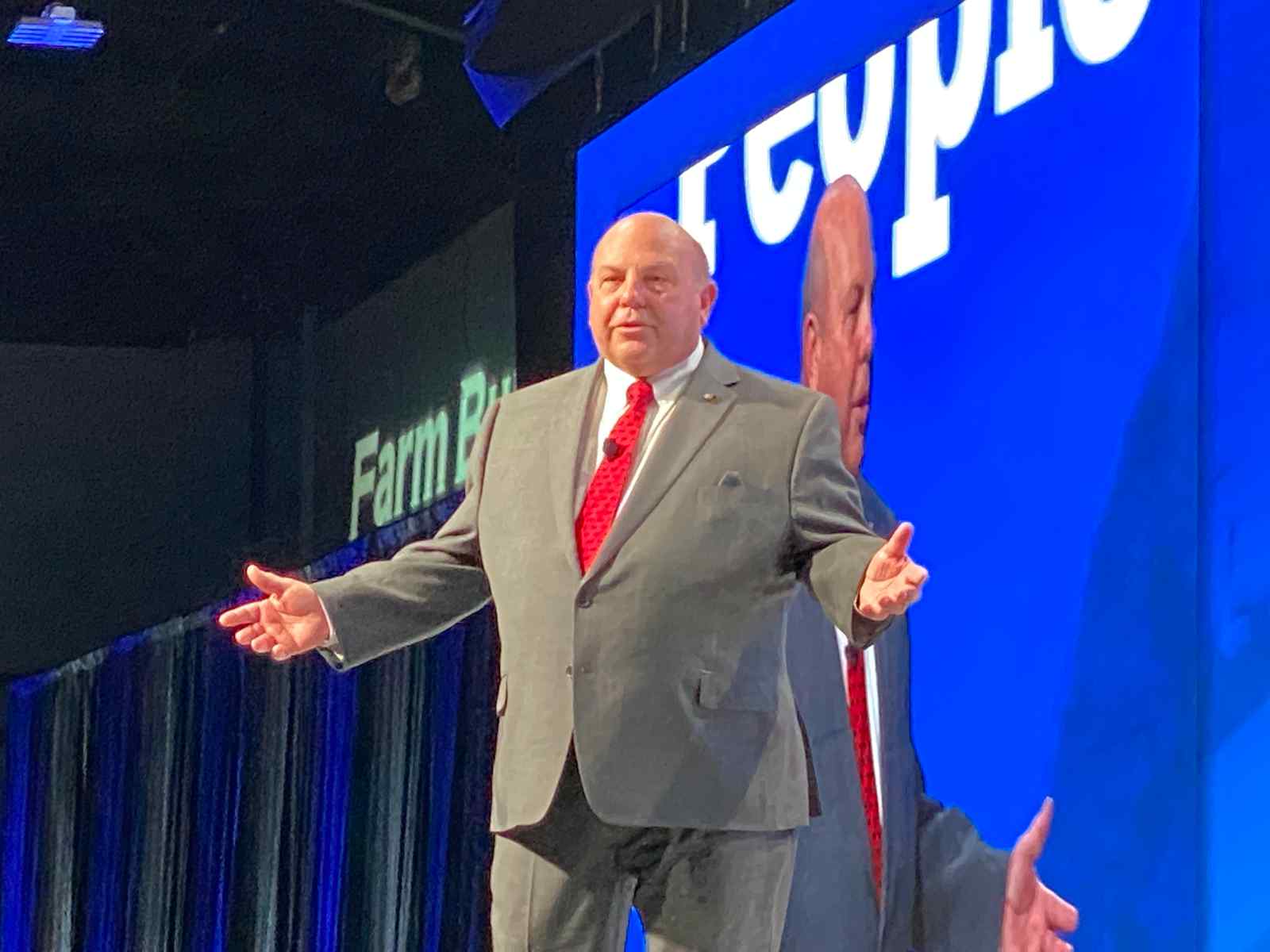 American Farm Bureau Federation President Zippy Duvall challenged members to be active in advocating for their position and telling the story of American agriculture during his address Sunday morning at the opening general session of the 103rd Farm Bureau Convention in Atlanta.

Duvall said he was energized by the conversations he has had as he has traveled the country visiting with Farm Bureau members. He said in the past year he has visited 26 states and Puerto Rico.

“In Louisiana, I saw firsthand how regulations like WOTUS can impact farms,” Duvall told the gathering. “Farmers in Arizona made it clear how H-2A visa delays are hurting agriculture. The shocking realities of the border crisis became very real when I visited our Southern border states. In Kansas, farmers weren’t shy about sharing their concerns around livestock markets. And in Puerto Rico, the power of farm bill programs to strengthen farmers was on full display.”

Duvall encouraged Farm Bureau members to become involved at the county level, building support for legislative policies that are important to the success of farms and ranches nationwide, and helping educate the general public about issues that have an impact on the agriculture industry.

“The American farmer is one of the most trusted professions today,” Duvall said. “That may not always feel true when you see negative headlines, but our polling shows that 87% of Americans trust farmers and ranchers.”

Duvall touted the success Farm Bureau has had in conveying the message of agriculture to Congress.

“One example is our leadership on sustainability and climate policy,” Duvall said. “Your American Farm Bureau stepped up and stepped in to make this time ours by ensuring you are recognized for your achievements and treated as partners. Two years ago, we saw the writing on the wall: major food companies making climate commitments with big implications for agriculture: Congress ramping up legislative proposals; and the public was increasingly calling for climate action. We knew that if we weren’t at the table, we would be on the table.”

He added that AFBF co-founded two coalitions to address sustainability: Farmers for a Sustainable Future and the Food and Agriculture Climate Alliance.

“We started by looking not at our differences, but at our common goals,” Duvall said. “Together, we highlighted the great work being done on sustainability. We established principles and made policy proposals to advance voluntary, market-driven approaches. The alliance recommendations have not only guided climate discussion in D.C., they are the foundation of legislation and USDA programs that respect farmers. I personally cannot recall another time when I’ve heard so many leaders on both sides of the aisle acknowledge U.S. agricultures’ leadership on sustainability.”

Duvall also discussed the importance for advocating for ongoing issues such as infrastructure.

“Another part of Growing Tomorrow, Growing Together is strengthening our rural communities through infrastructure improvements,” Duvall said. “After many years of Farm Bureau advocating for these improvements, we finally did it. Thanks to our united voice, Congress passed—and the President signed—a bipartisan bill that will invest in our roads, bridges, ports and waterways. We’re also excited to see attention to long overdue Western water infrastructure, which will ensure future production opportunities for farmers.”

Part of that infrastructure focus is the continued need to advocate for rural broadband improvements.

“Infrastructure isn’t just about roads and bridges anymore. It’s also time for us to bridge the great digital divide,” Duvall said. “We are finally on our way to levelling the playing field for farmers, ranchers, rural hospitals, rural schools and all rural Americans with a historic investment in broadband.”

Duvall included an impassioned plea for members to strive to bring more members from various backgrounds into the fold.

“We need to represent all of agriculture: drawing in farmers from all backgrounds, crops, races and regions,” Duvall said. “Let’s actively recruit and include new voices and perspectives.”

Despite the challenges farmers and ranchers face, Duvall closed with an impassioned rallying cry.

“Through even the greatest challenges, we never waver in growing the safest, most sustainable food, fuel and fiber in the world. And Farm Bureau remains true to our purpose: To be that one, united voice of agriculture,” Duvall said. The challenges we are facing today are getting so complex that it can be hard to wrap our arms around them, but let’s commit to staying connected and working together to solve them. It will take all of us to do it.”